Acupuncture, one of the Oriental medical therapeutic techniques inherited from ancient East Asia, is gaining popularity in the West as an alternative and complementary therapeutic intervention (1). Acupuncture is now being used in Western medicine to treat postoperative-induced and chemotherapy induced nausea and vomiting, postoperative dental pain, drug addiction, stroke rehabilitation and asthma (2). Korea has continued to develop its own unique traditional medicine throughout its long history, and has formed different types of acupuncture methods, apart from those of traditional Chinese medicine. An individualized approach based on constitutional energy traits and practical approaches applying new therapeutic modalities have been developed for treatment of disorders (3).
A large number of clinical studies using acupuncture have been performed to demonstrate its efficacy for many kinds of diseases, such as pain (headache, facial pain, neck pain, shoulder pain, lower back pain and knee pain), stroke, facial palsy
and other diseases in Korea. A wide range of control groups were used in these studies. Acupuncture and acupuncture related
therapies have been compared with various forms of control acupuncture, standard care, no treatment, baseline conditions and placebo acupuncture. These inconsistencies make the task of designing and performing systematic reviews or meta-analyses more difficult. However, non-controlled clinical trials might also be useful for the overview that they provide of what is known so far, with data that may inform future research. This review is an attempt to show a variety of applications for acupuncture treatments performed by the traditional Korean medical sector. 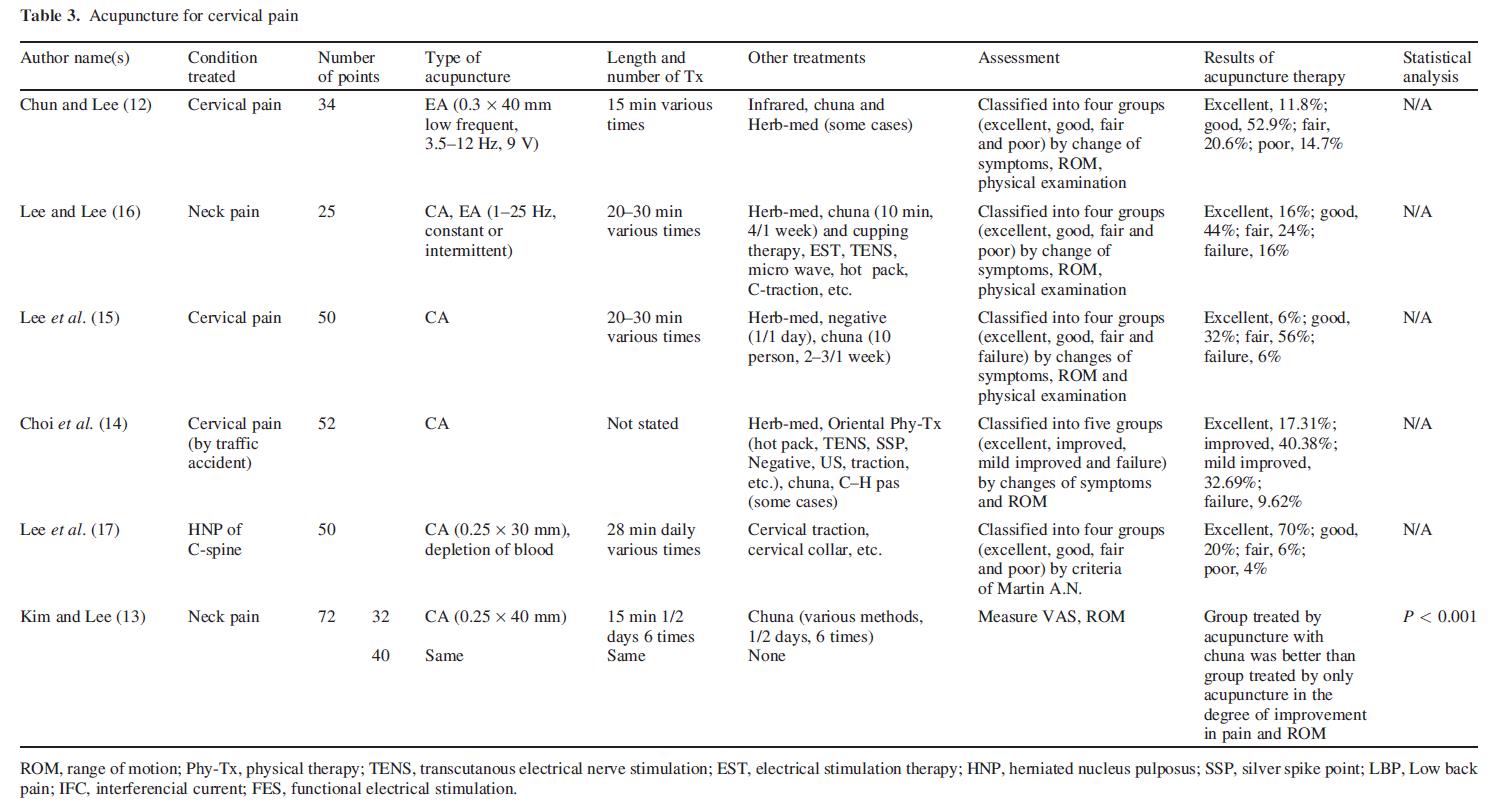 Forty-three patients suffering from frozen shoulder during physical exercise were treated by acupuncture, moxibustion and electric acupuncture, and evaluated with Apley scratch test. A total of 16.3% of them reported that the results of treatment
were excellent and 30.2% of them reported that they were good (18). Cho and Lee (19) showed the correlation between digital infrared thermography image (DITI) data and changes in clinical symptoms after acupuncture treatment in patients with frozen shoulder (Table 4) (Fig. 1). 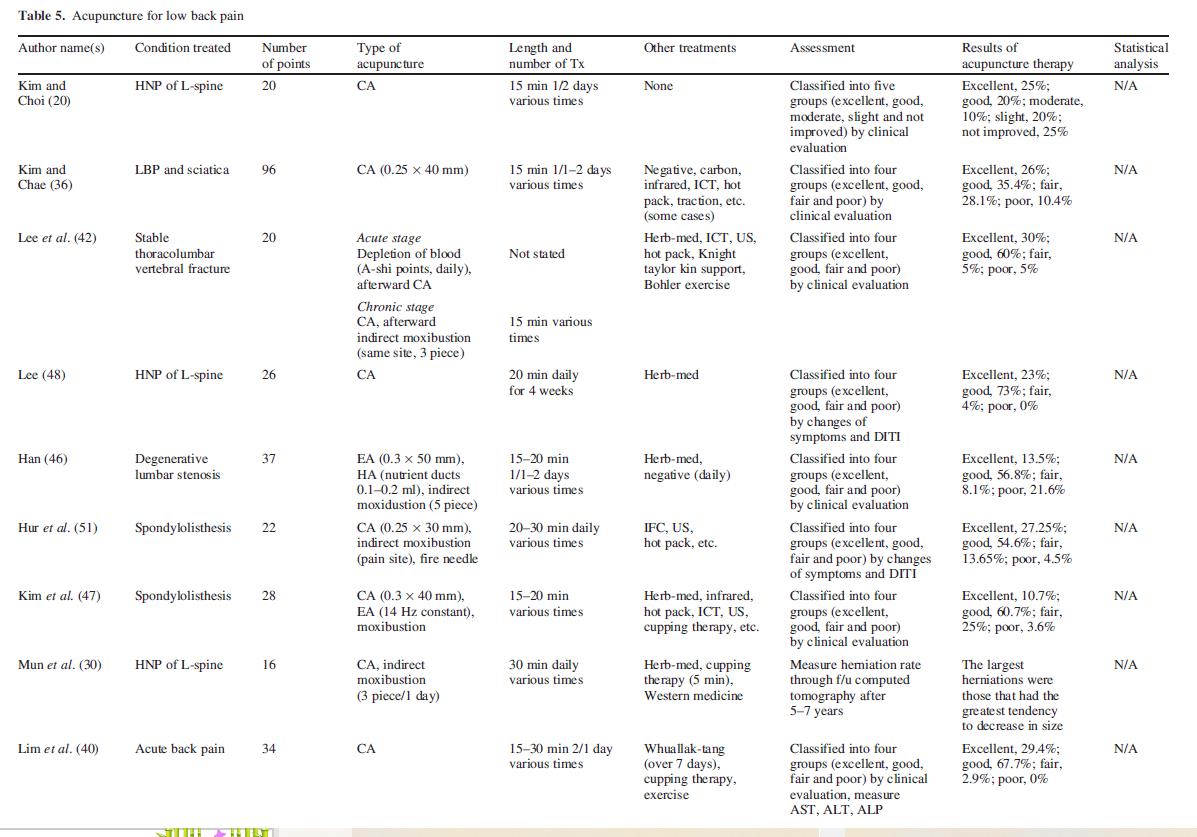 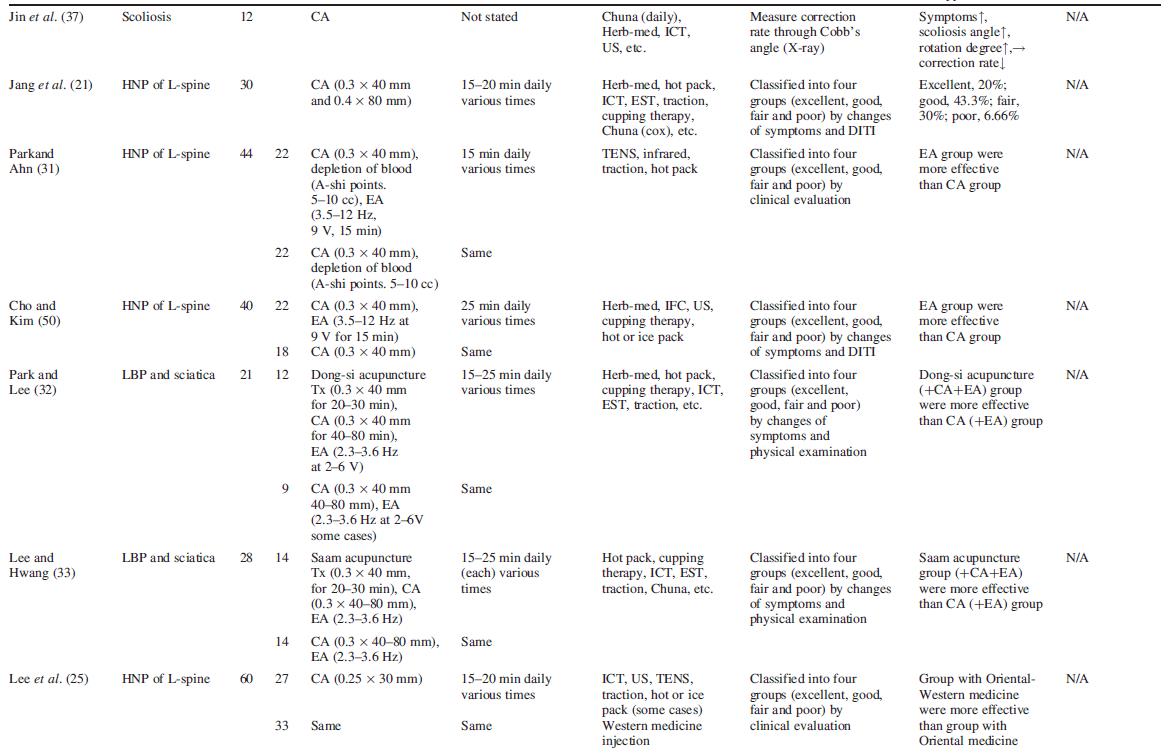 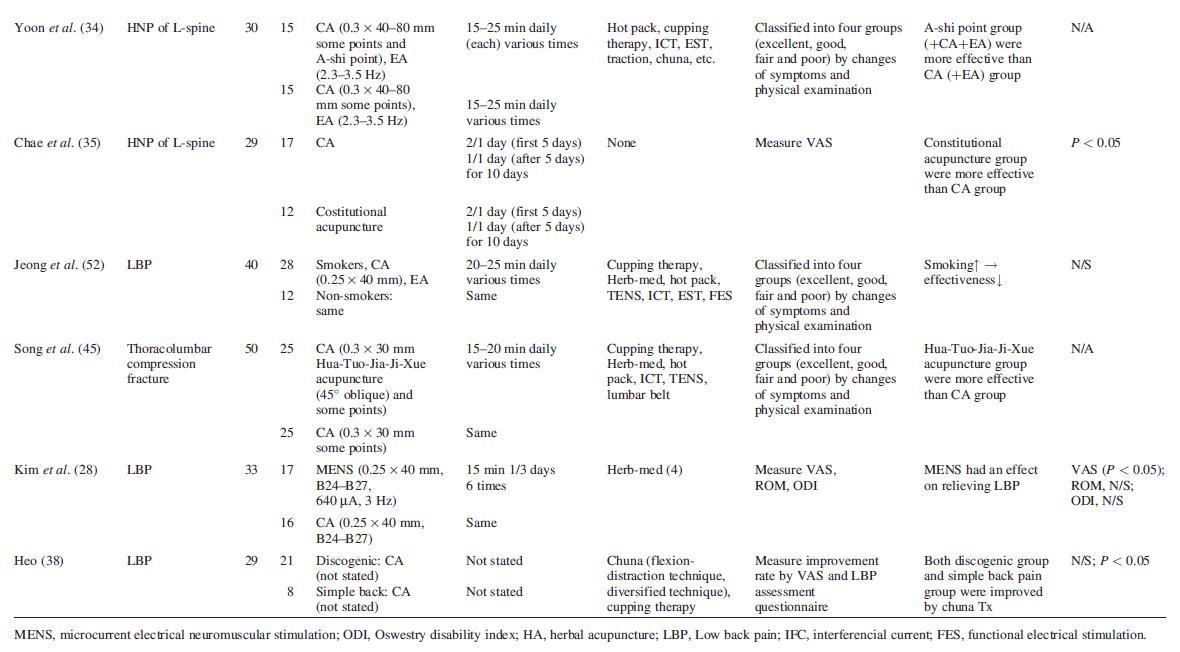 It was reported that acupuncture was useful for the treatment of degenerative arthritis of knee joints (55–57). Woo et al. (58)
evaluated the clinical effect of acupuncture on microtraumatic injuries of the knee joint. Kim and Lee compared acupuncture
with BVA for osteoarthritis (59,60). Hwang et al. (61) measured the change of C-reactive protein (CRP), erythrocyte sedimentation rate (ESR) and rheumatoid arthritis (RA) factor, and the satisfactory assessment after BVA treatment in RA
patients. Hwang (62) treated RA patients with herbal acupuncture (HA) and evaluated CRP, ESR, RA factor and immunoglobulin
G and M (Table 6). 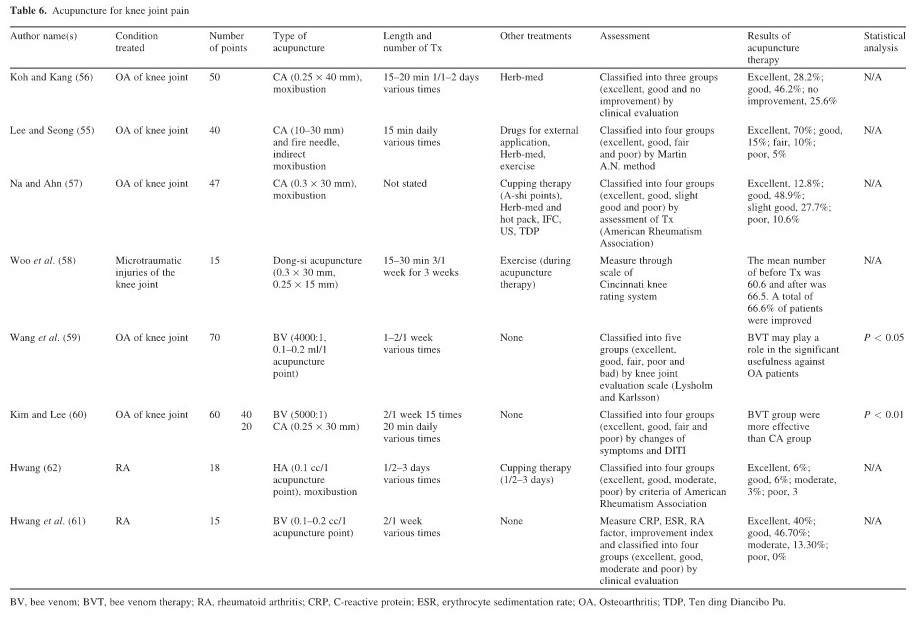 Electrical acupuncture stimulation was very useful to relieve pain that had not responded to various conventional medications
including nerve blocks, neurosurgical intervention and neuropolitics (63). Cho et al. (64) compared acupuncture treatment and analgesics in postthoracotomy pain control. It was reported that venesection, a therapeutic method of sucking out non-physiological blood, alleviated pain induced by blood circulation dysfunction (65). Kim et al. (66) compared acupuncture treatment with trigger point treatment in ankle sprain patients. Bang et al. (67) carried out a clinical study on patients with humeral lateral epicondylitis or tennis elbow. Seung and Ahn (68) investigated the effect of moxibustion on the immune
activity in the treatment of patients. Acupuncture treatment was very beneficial for acute gout (69). It was also demonstrated
that acupuncture at acupoints on the non-injured side were as effective as acupuncture at acupoints on the injured side in ankle sprain patients (70) (Table 7) (Fig. 2). 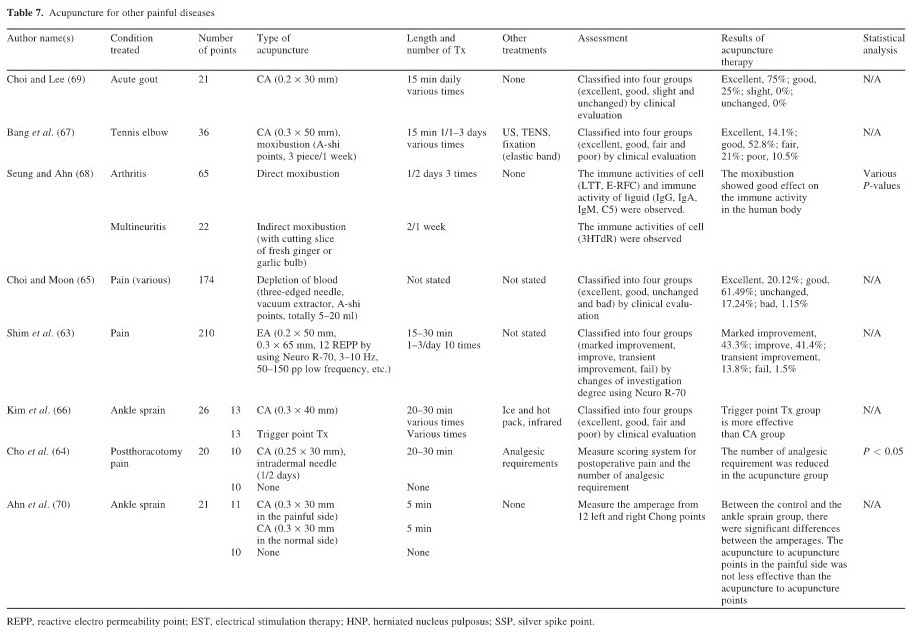 The difference between disc herniation and sprained back

The effectiveness and safety of cupping therapy for stroke survivors: A...