TEM is an abbreviation for Traditional Eastern Medicine; it stands for TEM herbal formula research. Euyjoonn Roh, Ph.D., is a founder of TEM in Korea. Dr. Roh TEM research USA is the laboratory where we study and research the herbal medicine theory of Euyjoon Roh.

TEM formula is mainly divided into general and classic formulas. Classic Formulas are the combination of Shang Han Lun and Jinkui Yaolue written by Zhang Zhongjing around AD 3C.

General formulas are the formulas that are written after Shang Han Lun.

I will introduce how to select the key formula that treats the patient well.

The essence of the natural world (clinical reality) may be irregular, indeterminate, and complex. Nevertheless, I think it is the role of the medical theory to inspect the natural phenomena and reconstruct certain rules, certainty, and simplicity from them.

All scientific theories evolve as they are selected, discarded, re-selected, and discarded again through the process of trial and error, according to the passage of time. So likewise, my medical theories are also only a temporary conclusion to this day, and I believe that they will evolve with time as they go through the verification process.

I wanted to create a good clinical approach that meets the following five criteria.

The requirements of a good clinical approach

Charting approach of Disease, Person, Herb, and formula is the name of my clinical approach.

Disease, Person, Herb, and Formula are the four pathways to approach the Key Formula. 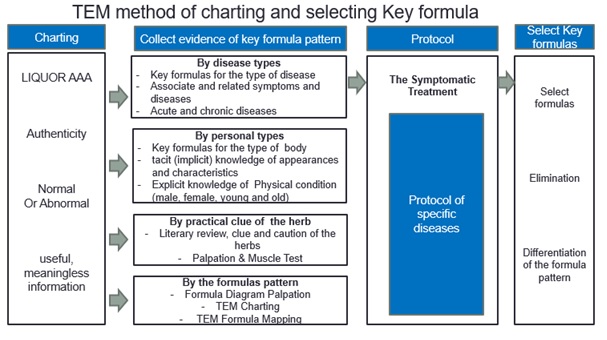 In the first approach to the Key Formula, we take the approach by disease types. So, for example, my protocols for certain disorders are standardized clinical guidelines/manuals to treat certain(=various) disorders. Example) Protocol for Psychological Disorders, Protocol for Musculoskeletal Disorders

For the last ten years, I have established various protocols for treating illnesses we approach in our clinical practice. Some of these protocols are included in my books <Yakseo: Clinical Signs of Guiding Herbs> and <The Manual of Formulas from Shang Han Lun and Jin Kui Yao Lue>. In my upcoming 3rd book, I will introduce the remaining protocols as well.

How to Distinguish Shingles from Lower Back Pain

How to Treat Spinal Disorders with Korean Medicine

Underlying Theories of Acupuncture Treatment (25) How to use cleft points