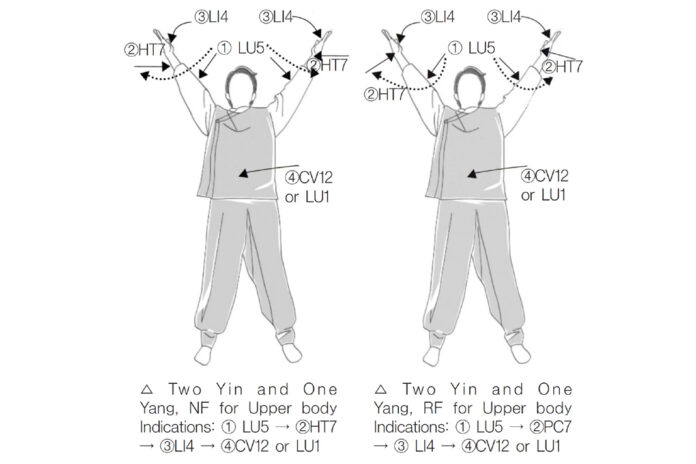 ▷ Yin Meridians on the upper body

▷ Yang Meridians of the upper body

▷ Yang Meridians on the lower body

▷ Yin Meridians of the lower body

One Yang and One Yin acupuncture technique require finding the possible meridian that causes symptoms first. Then it matches HAPs and SAPs by its Ying and Yang.

As you use the technique, you must follow specific rules:

Use One Yang and One Yin acupuncture technique for co-existence of Fullness and Emptiness on the upper and lower body.

Use One Yang and One Yin and Two Yings One Yang technique together to balance Qi distribution evenly for the symptoms such as a chronic symptom that affects HMs, EMs, and HUMs randomly or an acute symptom that causes severe Qi imbalance on a meridian.

It is required to help to restore functions of the lung meridian for symptoms like cold hands and feet and difficulty in the breathing of a patient whose body with full pelvic bones and a narrow shoulder.

It is diagnosed with Qi deficiency. To treat the symptom, first, insert needles on LU5s, which is one of HAPs and second use LI4s, which is one of the SAPs and in interior-exterior relation with the Lung meridian and has a role in bringing Qi from the lower body to upper body. This is how to use One Yang and One Ying Acupuncture Technique.

But if you have to deal with symptoms due to Qi deficiency in the Lungs and the Heart, Two Yin and One Yang Acupuncture Technique work better than One Yang and One Ying Acupuncture Technique. First, use LU5s. Then insert needles on HT7s. The reason I use HT7s is the acupuncture points have the role of SAPs and make the treatment as NF (EMs → HMs). Any acupuncture points which are located in between fingertips and bracelet lines could be used. But the reason I selected HT7s is its representativeness of SAP.

If a patient feels pressure on the chest, add PC7s. By adding PC7s makes RF resolve stagnation powerfully. Then it is possible to receive Qi by adding LI4s or LI5s, which are in a relationship as interior-exterior with the lung meridian after using LU5s for better smooth Qi movements throughout all meridians.

To finish the session of the treatment, add either back Shu points or Mu points. For the case, I discussed, add Mu point of the lung meridian, LU1s. Instead of using LU1s, CV12 could be used because the lung meridian emerges from the stomach area.

What is the organic Qi? — In contrast to the material substance of matter...

How to treat Parkinson and Alzheimer’s Disease with Acupuncture and Herbal...

How to Treat a Patient with a Car Accident