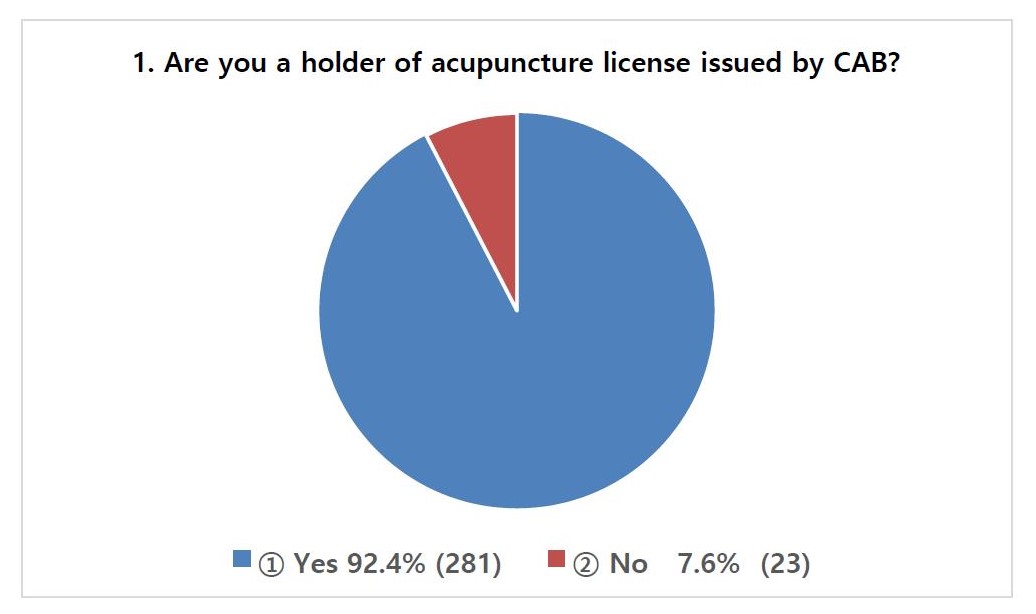 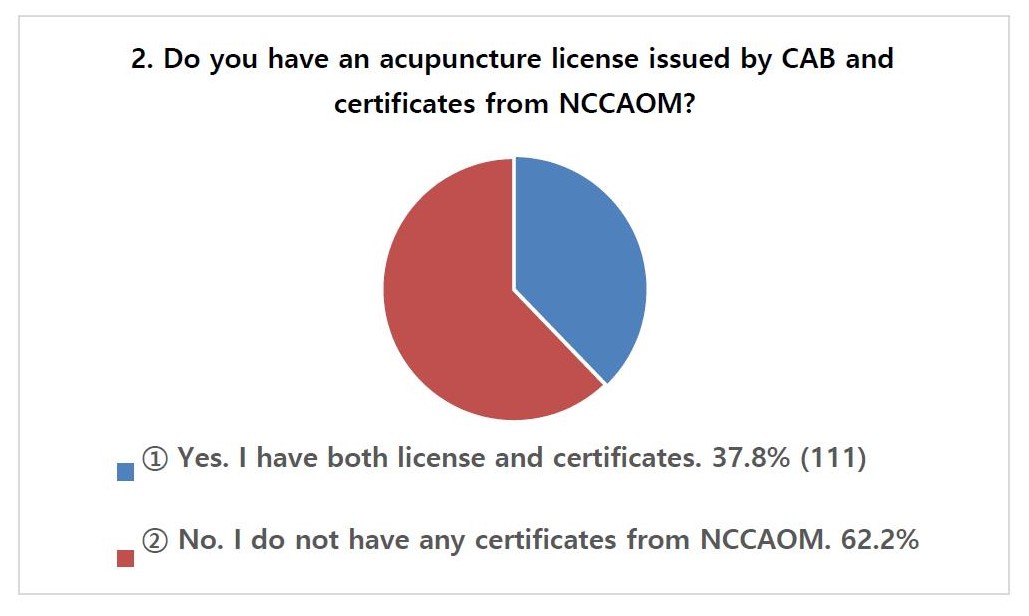 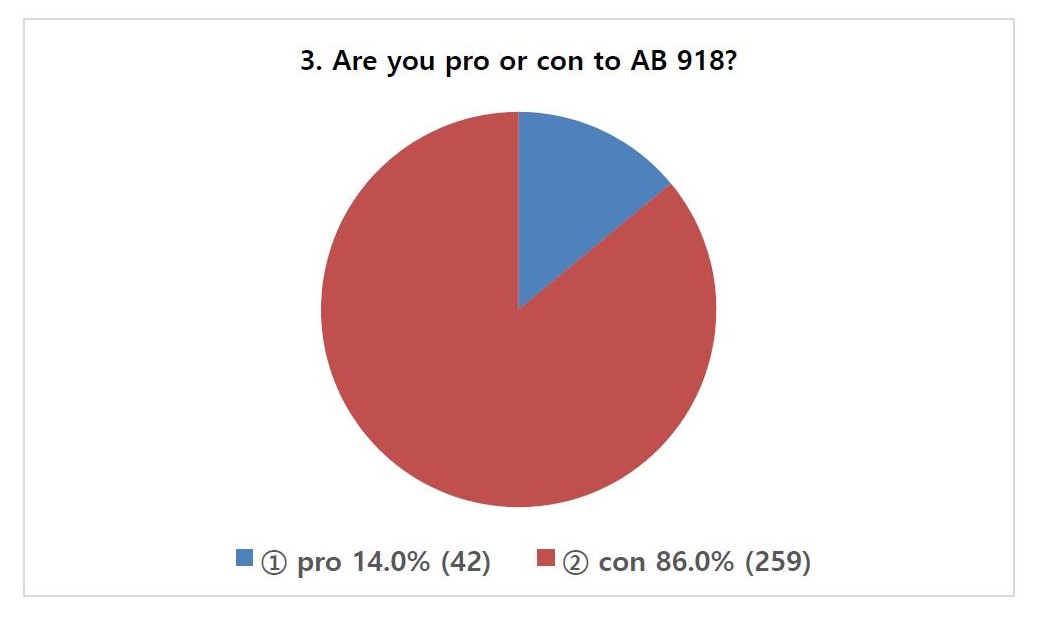 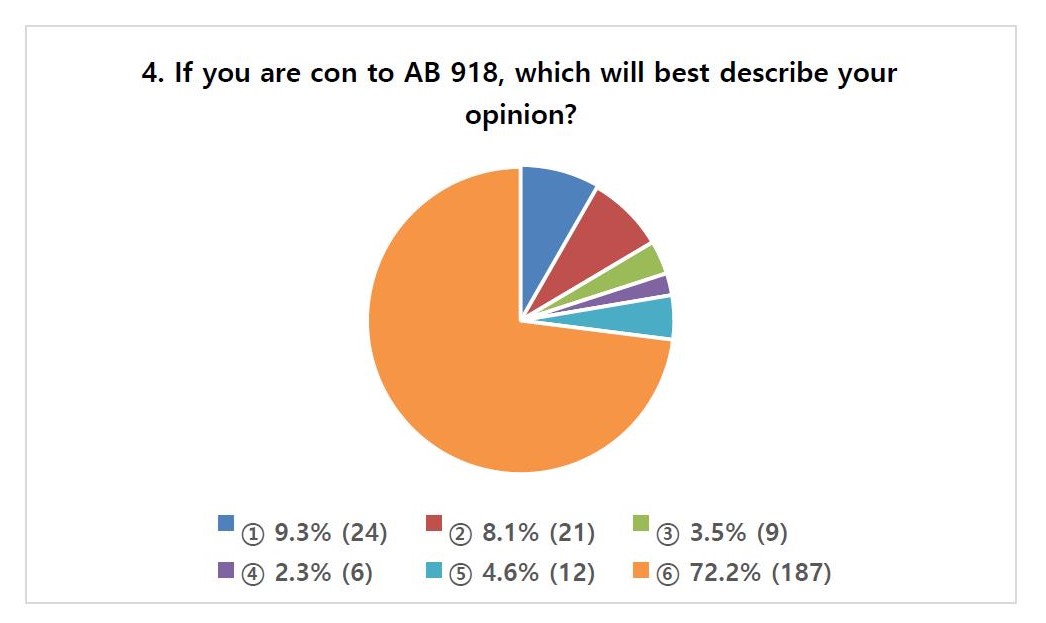 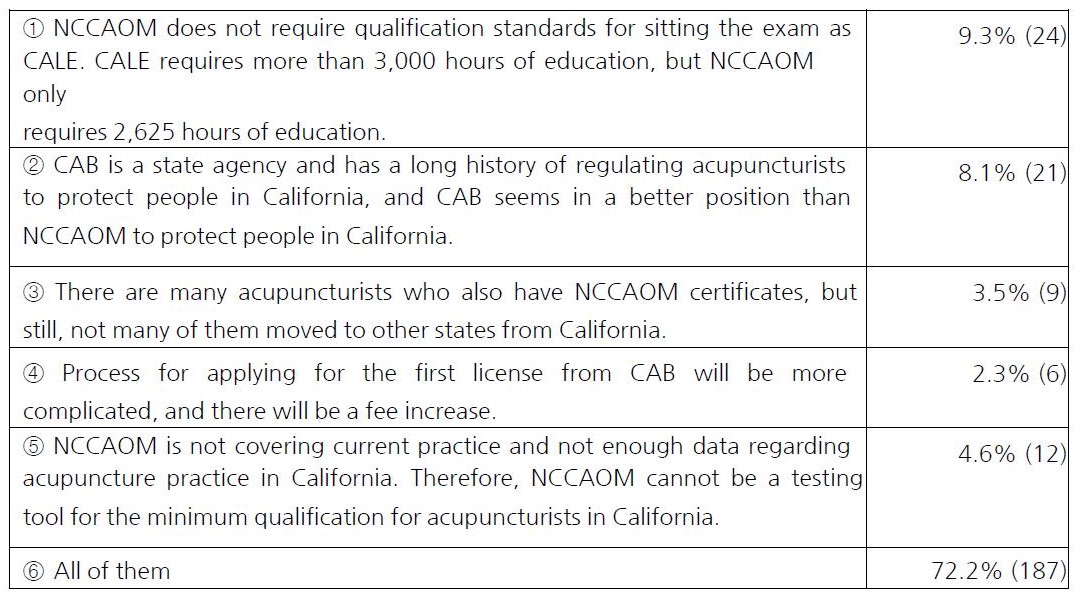 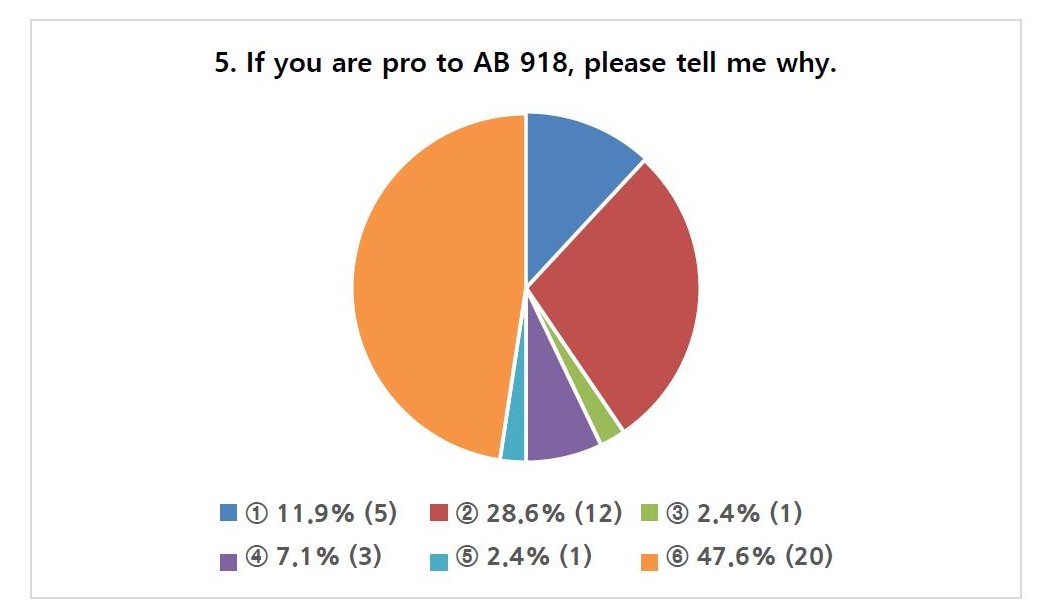 <Other opinions from Con to AB918>

* If you have other opinions, please write them in the box below.
(Total of 65 gave me their opinion, but some of the answers were saying similar opinions; therefore, similar opinions were omitted.)

1) I think it may help open up opportunities for CA acupuncturists to easily move across state lines to transfer their practice and reduce friction in relocation. It would allow more exposure to other states with increased access to eastern medicine licensed acupuncturists for healthcare and wellness. I feel that would benefit the entire field of Acupuncture by increasing confidence and awareness of eastern medicine practice across state lines.

3) The bill is poorly written. As written, it does not address California laws and regulations and doesn’t specify which NCCAOM exams would be required. It doesn’t allow for a California supplemental exam. It does not require that the NCCAOM offer exams in Korean, Chinese, and English. It was introduced without consensus by the majority of stakeholders. This is an attempt by CSOMA to ram something into law without consensus.

4) The CAB exam is, in nature, different from the NCCAOM exam in that it focuses more on actual practice settings instead of testing merely the fundamentals of Asian Medicine. The best exam process for CAB should be, in my opinion, that students need to pass NCCAOM before graduation and after passing the NCCAOM exam, then they can apply for CAB exam.

5) There are false statements above. -CA’s educational requirement will remain at 3,000+. AB918 does NOT change the educational requirement. -NCCAOM does a job analysis and covers practice. A study was done showing it was equivalent to CALE. I took both CALE and NCCAOM in 2018. NCCAOM is MUCH more difficult than CALE. I failed an NCCAOM module 2x but passed CALE on the first try.

6) If CA adopts NCCAOM standards, then the tutorial programs will be undermined or eliminated. Route 3 (Apprenticeship Applicant) will be eliminated in December 2021. The only other path is Route 4 – Combination of Formal Education & Apprenticeship Applicant. Route 4 point system benefits the schools and forces students into completing schooling and disincentivize students from receiving senior practitioner mentorship, as well as incurring large student loan debt. AB918 is a Trojan horse!

7) NCCAOM & CALE exams are different, so how can you compare them and replace one for the other?

8) I don’t like having 2 licenses or having different states regulate differently. It would be better as one national board to unify the whole country under one acupuncture license. On the other hand, I would not want one centralized entity to become corrupted and not support acupuncturists in the way they need to be supported.

9) Hi there, I’m definitely Con this. I did both exams in the NCCAOM is a joke it’s so easy anyone could pass it and they need fewer hours, so I think if anything, the testing should be more difficult, and the acupuncturist should complete more hours of training, especially in California where it’s already saturated we don’t need half-ass Acupuncture is here we need the best of the best, so if they can’t pass that exam, they’re not qualified. Why make it easier? I think that’s undermining our profession and making it look like a joke to the rest of healthcare.

10) Seeing from other states, applicants will most likely take two examinations: NCCAOM and state-issued exam regarding state policies and regulations. This will incur further expenses. Also, applicants will have to prepare for multiple exams with higher fees, amounting to ~$1835 for the acupuncture certificate vs. $1050 for CALE.

11) There is nothing special about doing Acupuncture in California versus other states. State regulation of professions is an excuse for corruption and government dysfunction.

12) This is a faulty survey as both options claim pro-918 status. 918 does not represent the diversity of California acupuncturists. Chinese, Korean and Japanese organizations, oppose it. Having a private company in charge of California licensure sends money out of the state and takes oversight out of the hands of the constituents.

13) I am not sure if becoming an NCCAOm member is going to be beneficial. The fees are definitely a concern. Will the NCCAOM be an advocate regarding insurance reimbursement?

14) *** I strongly believe it ought to be the other way around, i.e., replace Nationals with CAB, which is a far superior and appropriate exam. There are many faults/mistakes within the Nationals, especially within the point location section. The CAB is of a far superior & professional standard. I do but want & never want to be a part of the Nationals until they become more professional in exam standards & how they treat Acupuncturists.

15) This question is for if we are CON not pro correct? I am against this bill. I selected #5, but actually, I strongly believe in ALL the reasons stated here. The NCCAOM is run by a private company, which definitely will represent a conflict of interest and will take away the validity of a government body-run board of equalization. The NCCAOM test is not NEARLY as comprehensive as the current CA state board exam, and since CA is the state that hosts nearly 50% of the existing Acupuncturists in all of the US, I believe it is good practice to hold CA acupuncturists up to a higher standard. And of course, the licensing fee is already high for the CA board but is much higher for NCCAOM, which doesn’t make sense for those of us who do not plan on moving from state to state to practice.

16) About 66% of the acupuncturists in the US are from California. We hold the highest standards. Will NCCAOM allow lesser trained and experienced acupuncturists to flood our state? We must uphold our standards and protect the State of California.

17) The CAB is a racket that needs to be done away with. They’re constantly moving the target of what is a pass & what is not depending on how everyone taking the test scores. They’re not indicative of what it takes to keep the public safe, which is what licensing is supposed to be all about.

<Other opinions from Pro to AB918>

* If you have other opinions, please write them in the box below.
(Total of 24, who were pro to AB 918 gave me their opinion, but some of the answers were saying similar opinions; therefore, similar opinions were omitted.)

1) I took the CALE and passed and was at one time licensed in CA. The exam was poorly written, contradictory, and didn’t give me a feeling that somehow I was better educated for passing it when compared to the NCCAOM exams. It seemed unnecessarily difficult and more of a test of how well you take tests as opposed to what you know.

2) I am currently a graduate. I want to practice in other states besides California. It is too complicated to have CALE and NCCAOM. One test for all states.

3) It will require a standard of education as opposed to just teaching for the California Board only. This is a disservice to the students who have found themselves largely unprepared to take the NCCAOM

4) #1 and #2 Also, the difficulty of the NCCAOM exams will raise the standards of practice in CA. There have been questions with CALE security.

5) Only a small percentage of CA Acupuncturists currently or plan on practicing out of state. The standard of the CA licensing exam is what we should strive for, and also the acknowledgement from other healthcare professionals towards a state board governing body is much higher than from a private agency. Private sector governance definitely creates a conflict of interest. This should not replace the current CA board exam. Most professional licenses in the state of CA holds its licensees up to a higher standard than the rest of the country. This is as it should be for CA acupuncturists.

6) No state is safer or better served by any state acupuncture board. These state boards are just an opportunity for incompetent people to exercise unwarranted control over qualified professionals. One country, one acupuncture board, less corruption and incompetence.

7) Nccaom seems to becoming the standard nationwide it would be nice to have one body so that a practitioner could be bicoastal or travel and not worry about licensing changes.

More Effective Treatment Should Be Applied for Unsatisfied Back Pain Patients

Finding A Guiding Herb Makes Easier to Find the Most Efficient...

Acupuncture Theory and Holon Theory, The West Meets the East?

How to treat Parkinson and Alzheimer’s Disease with Acupuncture and Herbal...

Diagnostic Clue from the Shoulder Noise

The Practice of Korean Medicine: An Overview of Clinical Trials in...

Can GLP-1 Replace Ephedrine for Treatment of Obesity?