We know that body type diet and herbal medicine are instrumental in reversing diseases. But the challenge is establishing a correct constitutional diagnosis. Doctor Jema Lee, a Korean physician and founder of Sasang four constitutions medicine in 1893, had proposed a new way of diagnosing through neo-Confucianist perspective. The word Sasang means four constitutions in Korean. The word Taeeumin (pronounced Teh-Um-In) means Lesser Yang person in Korean. “Tae” is Greater, “Eum” is Yin, and “In” is Person. This Greater Yin person is the same as that of the ancient bigram where both Yin are in the upper and lower position as broken lines.

A Taeeumin has large Liver and small Lung organs. For treatment, Dr. Jema Lee prescribed herbs and foods to make Liver smaller and Lungs larger.  Today, we find that the constitutions discovered in Korea were not unique to Asians. Since antiquity, European, Indian, United States, and middle eastern scholars also independently discovered the same body types. Beginning with Hippocrates in 400 B.C. down to the 20th century, many scholars had identified the four constitutions in their variant characteristics. 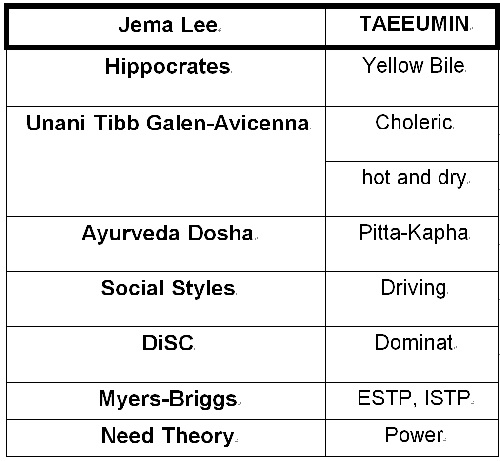 Clinically, I have identified Taeeumins to be robust in body and mind. They can handle high protein and fat diet, which help them to be healthier than vegetarian diet consisting of lettuce and cabbage. They do not get motion sick easily and can read book in a moving vehicle for a prolonged period of time. Their muscles bulk up quickly even with small amount of weightlifting. Most are tolerant to dairy and nuts. They are comfortable with strong cologne and perfume.

Taeeumin is a Choleric in Greco-Roman Unani Tibb and a Pitta-Kapha in Indian Ayurveda. Both describe these individuals as having strong willpower, with a clear goal-oriented nature. They are grounded, hardworking, and powerful with stability, creating the ability to move large obstacles. They have a combination of a resilient and competitive side with a calm, laid back demeanor. They have the perseverance to see through long projects and readily delegate responsibilities.  They are typically action-oriented especially in responsible roles.  They are outspoken and have boundless energy and stamina.

According to Social Styles, a Driving is Taeeumin. They tend toward a driving behavior with more assertiveness of pushing their agenda and less responsiveness in reacting to others’ input.  This individual is self-confident while not displaying emotions or feelings. This personality type quickly comes across to others as forceful, independent, and impersonal.

According to DiSC, “Dominance” is a Taeeumin. Dominance is a combination of task-oriented and active-assertive qualities. The primary motivation of these individuals is achieving goals. They are very active in using power and control when dealing with problems and challenges.

According to Myers-Briggs Type Indicator of 16 types, there are 2 types that are Taeeumin. They are ESTP and ISTP. “S” is an acronym for Sensing, which can retain details of information such as features and specifications. “T” is an acronym for Thinking, which is characterized by rational and logical thinking. This makes the Taeeumin less feeling or emotional. Their values do not stem from intangibles such as intuition and emotion. Rather, they prefer to cool-headedly process factual information. With a ”P” as Perceiving function, Taeeumins are good at making decisions or changing mind at the last minute, allowing them to be flexible leaders.

In Need Motivation Theory, a Need for Power is Taeeumin. Power motives are oriented toward influence and impact. These people like feeling a sense of power through controlling the self, others, and situations. The common words that describe the Power Need characteristics are: being number one, empowering self and others, enabling others, fighting for a cause, greater impact, higher status, impressive, king pin, leadership, overbearing, power, and top dog.

The dream of acupuncture being simple and effective has arrived