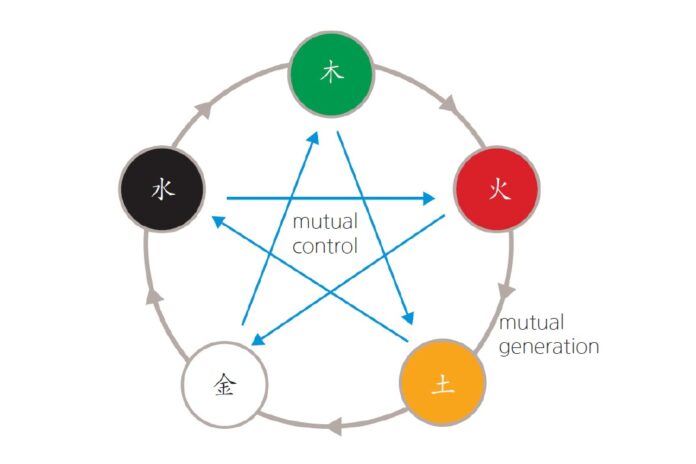 The theory of Wuxing is a logical system that determines the proper identity of Eastern Organic Medicine. It is the calculation method for living world like the arithmetic operation to estimate the quantity of matter. Yin and yang work by a binary logic like computer operation, and Wuxing works by a penta (five) logic. It is an organic interrelation of five different qi energies. Like dynamic physics, Wuxing acts on the principle of action and reaction towards two opposite directions; mutual generation (相生), and mutual controlling (相剋).

This figure shows a pattern of repetition in which a star appears in the golden division of the pentagon, and a pentagon is drawn in the star. This pattern is repeated infinitely with a kind of fractal structure. Compared to organic relation of Yin Yang synthesis, Wuxing pattern is organic interrelations among myriad things. Life is a very harmony of Wuxing, so it shows the golden split composition; 1: 1.615.

Living world is composed of Jingqi (精氣), not of matter seen in the Periodic Table of the Elements. The theory of Wuxing explains living nature as a special relationship. Actually, our human body is a precision instrument whose mysteries of organic perfection brought by this Wuxing. It means that the order of nature can be grasped as the pattern of Wuxing.

The theory of Wuxing is based on the qi world view. Then, what is qi world? By recognizing different objects given the same as nature, the world view of the quality image (氣質像) and of the quantity image (物量像) comes out. If the taxonomy of the substantial matter (實體) revealed in the quantity image is elemental, molecular, then the taxonomy of the Jingqi revealed in the quality image should naturally start from life and spirit.

In order to understand Jingqi world, we need to admit that, addition to four physical strengths – weak, strong, electromagnetic power, and gravity – certain vitality exists in the nature of universe. This is the very reason why the begetting of life (生生) is so emphasized in the I-Ching. The link between Yinyang and Wuxing theory ultimately depends on the concept of Jingqi life. The vitality of Jingqi needs to be added to all the fundamental energy to secure life in nature. The life world beyond the material world can only be grasped by the organic process of Wuxing.

Despite of his lifelong study of the history of Chinese life sciences, Paul Unschuld interpreted the theory of Wuxing as the systemized magic powers. Even in China, the so- called homeland of Eastern medicine, the theory of the Wuxing once has been burned. After the modernization of China, they had to disgrace the Wuxing superstition for a long time. This is the reason that the traditional Chinese medicine has declined and most of them are integrated into Western medicine in China.

As far as concerned with the philosophical basis of Eastern medicine, the theory of Wuxing is like the arithmetic operation (addition, subtraction, multiplication, division) of life laden Eastern Organic Medicine. Wuxing contains a reciprocity principle of creative production, productive control. Wuxing, as a fractal pentagon, presents a synoptic view of the possible links between the various strata of nature. We can experience the reality of nature by Yinyang, two poles of basic substance, and Wuxing, five energies represented by wood, fire, earth, metal, and water energy with life force.

The Difference between Disc Herniation and Spinal Stenosis

I Want to Publish a Book that Introduces More of Acupuncture...

A Case of Acupuncture Treatment For Cerebral Infarction Patient

The Acupuncture Times starts its first publishing on April, 2019. It is first ever Korean and English bilingual printed newspaper in Korean Acupuncturist community in the States.
Contact us: [email protected]