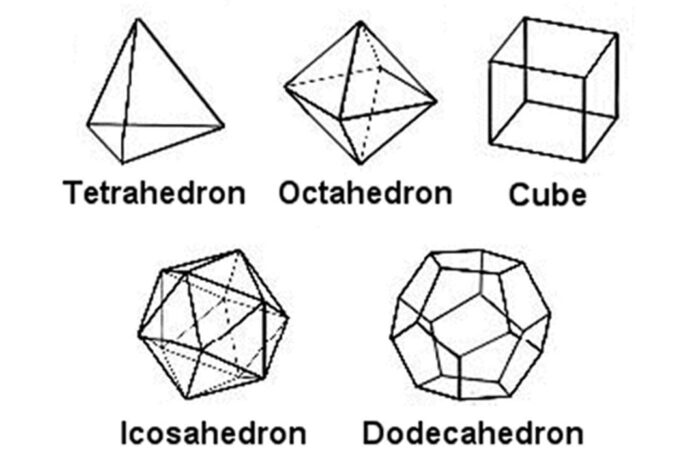 Plato thought that the cosmology established by physical material was arbitrary

Greek philosophers sought to build a cosmology based on the ultimate material by searching for the ARCHE, such as water, fire, air, and earth. Parmenides, a pre-Socratic Greek philosopher, proposed the atomic theory, which supposes that everything in the universe is either atoms or void. However, Plato thought that the cosmology established by physical material was arbitrary. So, he tried to explain the prototype of the universal nature by introducing geometric shapes.

Plato thought that natural elements such as water, fire, soil, and air were made from differences in metaphysical shapes, not differences in their properties. He considered the five cubes as models of such cosmic fundamentals. Platonic solid is, any of the five geometric solids whose faces are all identical, regular polygons meeting at the same three-dimensional angles. Also known as the five regular polyhedra, they consist of the tetrahedron (or pyramid), cube, octahedron, dodecahedron, and icosahedron.

In the previous series, I contended that the Whiteheadian concept of AE/ AO is equal to Yinqi/ Yangqi (陰氣/陽氣) and it functions by the reciprocity logic of Yinyang. Now, let’s explain how the movement of yin qi and yang qi creates myriad things (萬物) in terms of the concept of Nexus in Whitehead’s organic philosophy. Organic philosophy is, above all, a philosophy of relationships that values interrelatedness and interconnectedness. In a way, the reality of modern physics is determined by the relationship between proton (陽性子) and electron (陰電子). The relation of Yinyang and the interrelations of Wuxing show the same pattern.

The terminology of ‘Nexus’ coined by Whitehead originally refers to an integrated interconnection, not just a simple connection. Nexus is called a combination of AE/ AO to form a complex and macroscopic being. The Nexus is experienced as real things daily, but the AO/AE is an object of experience that is confirmed only through metaphysical speculation. The importance of the category of Nexus lies partly in its great generality, a generality that can be adequately represented in terms of the logic of relations.

It can be said that the relationship between the AE/ AO and the real world is a chain and a connection of NEXUS. In East Asian philosophy, this is substituted by the Wuxing (Five Elements/ Structure). All the airplane parts displayed on a wide stadium is not a flying airplane. Each part must be assembled in an appropriate structure to perform its proper function adequately. The Wuxing nexus can be said as an assembly method.

Wuxing’s relational logic expresses the generality of existence, making it the most sophisticated and closest to capture all things in nature. This is unmatched by Plato’s geometric thinking. While Plato was unable to explain dynamic natural phenomena and the eruption of all things with geometric models alone, the Wuxing theory, which is in line with the phase of Nexus, was able to successfully explain all the natural phenomena, including life, mind, and spirit.

One Yin and One Yang Acupuncture Technique is the Gentlest Treatment

How to Treat Spinal Disorders with Korean Medicine

History of Integration of the Best of Eastern and Western medicines

Whitehead’s Nexus (連繫體) and Wuxing (五行): the logic of relations in...

Underlying Theories of Acupuncture Treatment (24) How We Use Eight Extra...

Hanism Has Roots in the History of US Acupuncture